The Value of Information

The rain pelted across the old Volkswagen windshield as if it had been sprayed on by a garden hose. The tired wipers complained with a stuttered uh-uh-uh as they tried to keep ahead of the horizontal liquid barrage of all things blurry through every window.
To say it was dark would be an understatement. Because this dark suffered from black ink that blew sideways trying to knock the little car off the dirt road. Headlights?…Bill remembered he had them before the rain started but was now unable to confirm their existence.
Bill and Tammy were taking,….well,..Buddy home. They didn’t know the poor guys name. They were doing a Good Samaritan / Designated Driver thing. They had found him slumped between two cars in the parking lot at the pub they had visited after the hockey game.
Bill had tried to get him back on his feet, but as soon as he had righted him, Buddy folded himself back up like a city map. His folds and creases just didn’t look right.
“We’ve got to take him home Bill.” Tammy insisted while Bill was trying to stop the bleeding. Seems Buddy had kissed the side view mirror in his effort to regain his original horizontal format.
It was after two more attempts at verbally insisting and physically attempting to vertically right Buddy that Bill gave in. Buddy was getting pretty beat up by they car they kept trying to stand him beside. A bleeding lip, a bloody nose, and a serious looking scratch which made him look a little like Al Pachino in the movie Scarface.
He gave no name but seemed happy with the temporary title of Buddy. And in his extreme state of inebriation in public Bill could relate as to why he might want to keep his name in question.
“Can you tell us where you live Buddy? Do you know where your house is? Is there someone we can phone? Are you here alone? We’ll drive you…..”
“45,..3? No 454,..5 Spp pruucee Lane.” He sprayed, as he interrupted Tammy. Each number four he pronounced had about fifteen ‘Fs’ in it and probably about as many ‘Fs’ again in the fives. At least he cut back on the ‘Ps’ Tammy thankfully noted.
The rain now started to accompany the already annoying wind as Bill folded Buddy into the back of his space challenger. That is to say his vintage Volkswagen was limited in seating area.
Tammy, now wishing she hadn’t worn a short tight skirt, crawled in the back with Buddy, holding a now bloody compress against his nose. Bill started the car checked his gas and smiled at Tammy in in rear view mirror as they started into the night.
Bill checked his watch as he turned left on to Spruce Lane. Chinese dentist time he smiled remembering his grandpa had always called 2:30 Chinese dentist time.
Slowly he followed the address to 4541, 4543 and 4545, destination achieved. Bill stopped 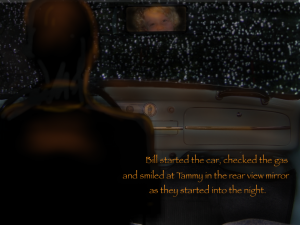 the car on the road and pulled up on the hand brake. Tammy woke up Buddy with a cheery, almost excited “We’re here! We got you home Buddy. Let’s get you out.”
Bill leaned the drivers seat forward as Tammy poured more than pushed Buddy out of the back seat. Bill wrapped Buddy’s right arm around his shoulder and with Tammy manning the left side they made their way through a gate, along a walk, up a ramp and to the front door. Tammy pressed the door bell which started a dog barking in the back of the house, and with each bark it seemed another light turned on. Both Bill and Tammy sensing their job was done, and Buddy was home safe to face the music, turned to leave before the door could open. Buddy, seeming to admit defeat to a vertical lifestyle again folded himself back down to his city map style just as the door opened.
Both Tammy and,…? Mrs Buddy, let out a little scream which deadened the sound of Buddy’s head connecting with the door. Buddy, now much more awake began using and slurring words his former Sunday School Teacher would not have approved of.
Buddy ran out into the front yard. Peed on three trees and back into the house. Apparently Buddy was the dogs name as well. “Good boy Buddy!” Mrs. Buddy said.
No introductions were made as Bill and Tammy were now wet and wind blown and wanted nothing more than to get in the car and head home. Mrs. Buddy stopped them with a heartfelt thank you and wished there were more people like them. She then asked if he had been beat up and robbed. Both looked at each other and feigned ignorance as to his condition and assured her that he probably hadn’t been.
“Well thank you again for bringing him home.” Mrs. Buddy yelled over the wind as she cradled his head. “He sometimes gets like this when,…? Ya have to love them right? For better our worse.”
She stood up gave them both a hug as they turned to go. Bill had just opened the gate for Tammy when Mrs. Buddy yelled through the weather “Do you happen to have his wheelchair?”


Information has been and always will be a valuable tool. Using search engines and inbound marketing with original, factual information satisfies a big active audience searching to buy. And to become successful at inbound marketing the knowledgeable public demand valuable information about your product.
Make your mom proud of your success! Take the lead in inbound marketing by offering free information that helps others gain economic advantages and make your site more valuable than sites with perhaps less information.
And by helping other gain economic advantages not only is mom happy but you’re also being a Good Samaritan. And a Good Samaritan with valuable information is highly valued. Don’t be a Bill and Tammy who the only information they knew about Buddy was that he peed on trees in the front yard and was highly praised for doing so.
We’re still looking for Bill Jensen’s wheelchair.