Young Tom Booker was the trouble maker at Arrow Flats. If something was stolen, broken, painted over with graffiti or shot at it was usually Tom who received the first call from the sheriff. So it should of been no surprise to Tom when Sheriff Gibson questioned him about the number of fish he’d been bragging about down at Mel’s.

Mel’s was the coffee shop in town where all the locals shared breakfast, news and gossip over Mel’s weak bitter coffee. Seems Tom was shooting his mouth off to anyone who would listen about the number of fish he had caught in just half an hour. Sheriff Gibson, armed with this gossip and the complaint phone calls about explosions down at the lake had him very suspicious of young Tom.

“Now Tom,” Sheriff Gibson questioned through the hay stalk he held in one side of his 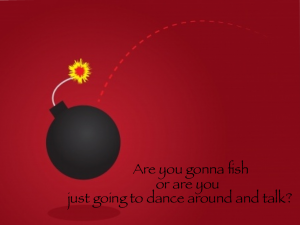 mouth. “Am I to understanding that you caught six rainbow trout and two perch in less than half an hour? At Lake Peed? Yesterday afternoon? Just you,…by yourself?” “Why yes-sir-ee-sir I sure did! And if-in you like Sheriff Gibson you could come with me today and we can catch us some more.”

“Now Tom, people think you’re using dynamite to do yer fishin. And we can’t have that round these parts. Understand Tom?” Sheriff Gibson pressed as the brim of his hat touched Toms face. “Oh no sir, yes sir Officer Gibson.” Tom gulped. “You go home and get yer poles and nets and bait and maybe yer fly rod with yer famous flys you tie that I’ve herd so much about and meet me down at the wharf?”

“Meet me in half an hour Tom.” said Sheriff Gibson as he walked to his car.
It was the sheriffs third trip from the car to the wharf with all his fishing gear before he even saw young Tom. He was whistling coming down the dock with what looked like a kids lunch box. “Where’s yer fishin gear Tom?” Hollered the Sheriff. To which Tom raised the box in his left hand and pointed to it with his right. “If-in yer using dynamite, like I think you are, to catch fish you’ll wind up in the county jail so fast it’ll make” … “Sheriff,” Tom interrupted, “I promise to you that ‘I’ am not using dynamite today to catch fish. Besides look at all that there equipment you got fer catching fish.”

They both hopped in the boat, Tom pulled on the motor, and they both set off to Toms secret fishing spot. A cool breeze lightly rippled the top of Peed Lake as Sheriff Gibson was switching from casting to fly fishing. He certainly had all the gear but it just wasn’t working today. He had just tied on his lucky fly to his line when he looked up to see Young Tom holding a lit stick of dynamite. “I knew it Tom! You can’t fool an old fisherman like me! I know how many fish are in here and how to catch them the tried and true way and YOU” … just then Young Tom threw the dynamite stick with the quickly shrinking lit fuse to Sheriff Gibson. The sheriff now holding the dynamite started doing some boat capsizing jig when Tom questioned his intentions. “Well sheriff are you gonna just dance around talking or are you gonna go fishin?”

Now just as young Tom exaggerated and tricked Sheriff Gibson into buying his method of fishing so do advertisers in their product lines. Audiences have learned to see through advertisers claims and it now has become a challenge to win the trust of customers. With contact marketing it’s more about communicating with the target market. And in doing so makes sense to try and gain as much respect as possible by telling the truth than to exaggerate the facts just to trick people into sales. Image problems occur when people realize they’ve been fooled by advertising. It can and does damage association with your brand.

Just ask young Tom whose spending time in the same place for the next 30 days.